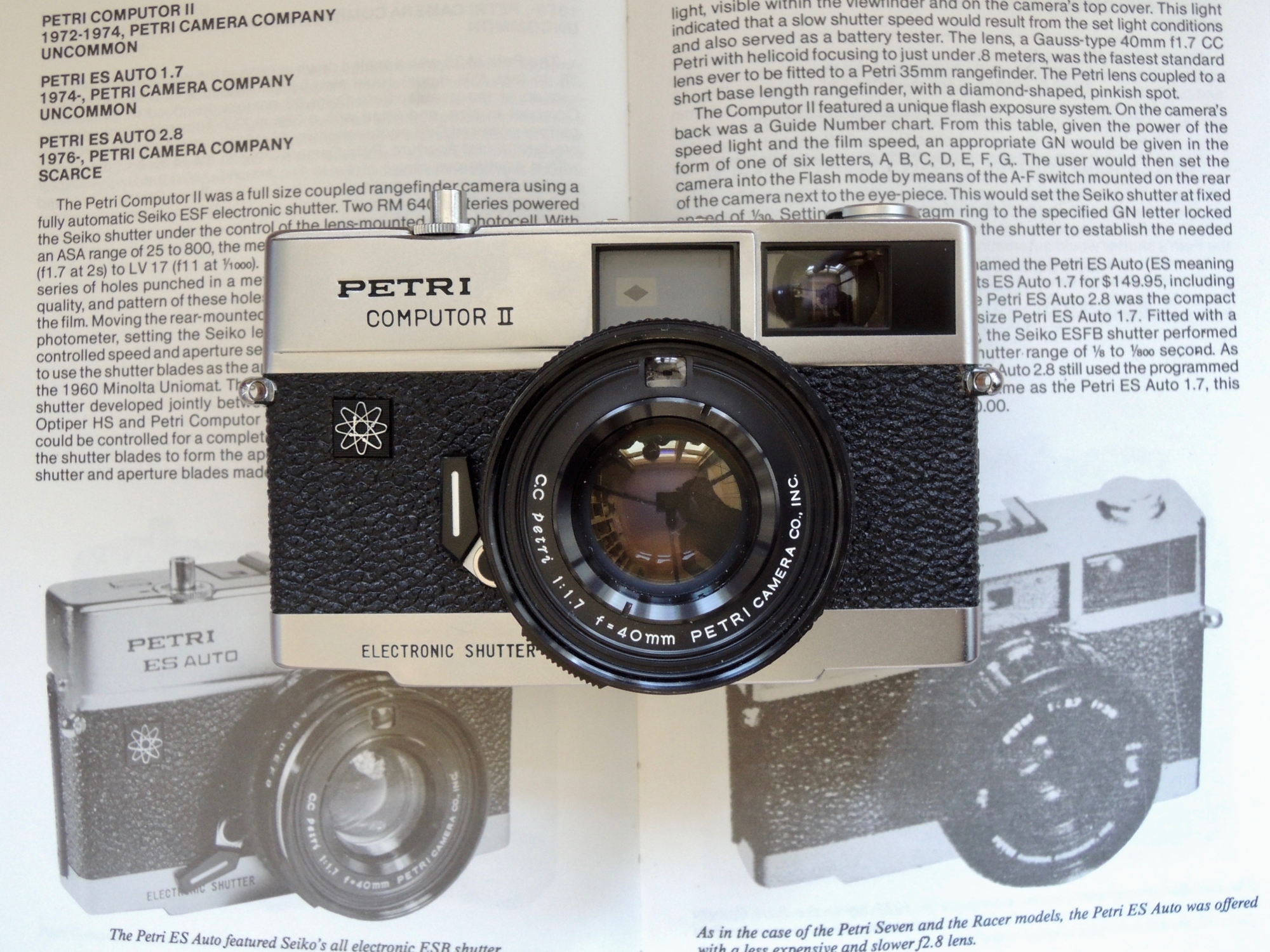 In the beginning was the word, or in this case, a book: John R. Baird’s “The collectors guide to Kuribayashi-Petri Cameras”. Before I received this book as a gift from Tomi, who owns the Múzeum Antikvárium in Budapest, I never heard anything about Petri Cameras and did not know too much about the history of the Japanese cameras either. The book describes the fascinating story how fast the Japanese manufacturers acquired the necessary skills after entering late the international camera market to dominate it for a long time.
But, this is not a blog about photography in general or even books as I only write here about cameras in my possession. So, to make this “Petri” post happen, I needed a camera first. A few weeks ago, I entered the renovated (?) Fotomax store, but only to ask where they got their Pajtás camera (which I never saw outside Hungary) and then I discovered a Petri Computor II. Finally, a camera to the book! The friendly salesperson immediately looked for fitting batteries, we both tested it without any knowledge of it (they bought it in a bundle with other cameras) and I took it home. As usual, I did not bother to test it too much but instead just loaded a film, briefly looked at the manual and started to shoot. I was sure the camera was broken: the shutter was less “loud” than on my Olympus XA and there was no “low light” warning while shooting in the subway…

What is a Petri Computor II?

Before I write about the camera, I would like to briefly share my knowledge about the company that made it: Kuribayashi-Petri, one of the oldest camera makers of Japan. Founded in 1907 as Kuribayashi Seisakusho (= manufacturing plant) by Kuribayashi Yoji as a shop for tripods, plate holders and other photographic equipment, they produced their first medium format camera, the Speed Reflex in 1919. Later they changed their name to “First camera works” and after the second world war to “PETRI”. To explain how and why they picked this name, I would like to quote John R. Baid:

… With this new camera from Kuribayashi came the introduction of the brand name “PETRI”. During the postwar, reestablishment period, the company (with prospective international market in mind) decided to find a brand name for their new camera that would be well received outside of Japan. Petri was chosen from an employee contest to select the new name.
Petri was derived from St. Peter, the first Roman Catholic Pope: PETER the 1st or PETR I, finally PETRI. Later, the Roman numeral “I” was changed to the letter “i”, forming the word Petri, as we now know it. It was hoped that with the use of this name, a statement about the capability and admirable quality of the camera would be imparted. Within a few years, the Petri mark dominated the company’s cameras and lenses, finally becoming the name of the factory in 1962.

Petri produced all kinds of cameras: from medium format bellow cameras to more complex TLRs; 35 mm cameras from rangefinders, viewfinders, half-frame cameras and SLRs; and finally pocket film and Instamatic cameras. Interesting models were the Petri Color 35, one of the smallest Japanese full-frame 35 mm viewfinder cameras of the time and the Petri 7 series, a rangefinder with a selenium cell (like on the Olympus Trip 35, the Olympus Pen EES-2 or the Zorki 10) around the fast lens.
Sadly the product range was probably too wide: in 1977 the last Petri cameras were produced, the factory closed shortly afterwards and the brand name was sold.

The Petri Computor was the successor of the Petri 7 and Petri’s first rangefinder with an electronic CdS light meter. It was released in 1970. In 1972 the Computor II with a faster ƒ 1.7 lens followed. If you wonder why Petri named it “Computor” instead of the more common “computer”, I wonder too, but maybe discussions about that name made Petri to rename it to “Petri ES Auto 1.7” later.
The Petri Computor II is an automatic 35 mm rangefinder camera. I would call it medium-sized, as it is bigger than an Olympus XA or the Olympus 35 RC, but smaller than my Yashica Electro 35 GT with an equally fast lens (which has a similar sign of an atom on the front). Unlike those others, it works fully automatic, so you can (or have to, depending on your taste) not select the aperture or the speed. To operate, it needs two batteries (see tips) to power the light meter and the electronic, step less Seiko ESF shutter (which also doubles as the aperture as I learned). For long time exposures, there is a standard tripod mount, a cable release socket and a self timer. For flash photography a hot shoe and a PC socket are present.

As this is a fully automatic camera, the operation is really simple: After you inserted fresh batteries, open the camera’s back with the small lever on the left side. Insert the film as usual, rewind, and close. The film counter will be set to “start” automatically. Now set the ASA to the films speed from 25 to 800. Now the only “unusual” part: On the top of the back you’ll find a small slider, set it to “A”. The “F” setting is used for non automatic flash photography. Now unlock the shutter button by turning to shutter lock which surrounds the button (This lock also ensures that the camera circuits are off). After this, the camera is prepared. To focus, turn the focus ring until the diamond shaped split image aligns with your object. For closer shots, stay within the dot shaped parallax marks in the viewfinder. When you press the shutter slightly, an orange light appears in the viewfinder and on the top plate of the camera. This indicates that the camera is working. While you press further, the orange light will

The speed range is from 2 to 1/1000 s, the aperture opens from ƒ 1.7 to 22 which gives the camera a quite wide EV range. When you fully depress the shutter button, you will hear a silent, “whirring” noise, at least on my camera. After this, the camera automatically powers off until the shutter is cocked again with the single strike advance lever. When the film is full, press the film release button on the bottom of the camera and rewind the film with the rewind crank on the top left. For long exposures, attach a tripod and a cable release or use the self timer. For flash use, the camera has a specific flash setting:

The Petri Computor II is an unusual camera (at least in Germany) with a fast lens and due to its smaller size it might replace my Yashica for low light photography. And it reminded me of two things: first that discovering unknown cameras and not only looking for “missing” collectibles is a huge part of the fun I have with my collection and second that the best things sometimes come as gifts.

Like other cameras from this era, the Computor II was designed for 1.4 V mercury batteries. This post suggests that two 1.55 V SR44 with some extension springs or similar should work as well. However, I use currently two CR-1/3N batteries, as those were put in by the camera store, although the resulting voltage is now 6 V, which might explain the whirring sound.

https://www.butkus.org/chinon/petri/petri_es_auto/petri_es_auto.htm (The manual for the similar Petri ES Auto)
http://35mm-compact.com/compact/petricomputor2.htm (A review in French which warns not to use 3V batteries)
Múzeum Antikvárium  If you visit Budapest: here you can buy great old books! (And online too)

10 thoughts on “The Petri Computor II”