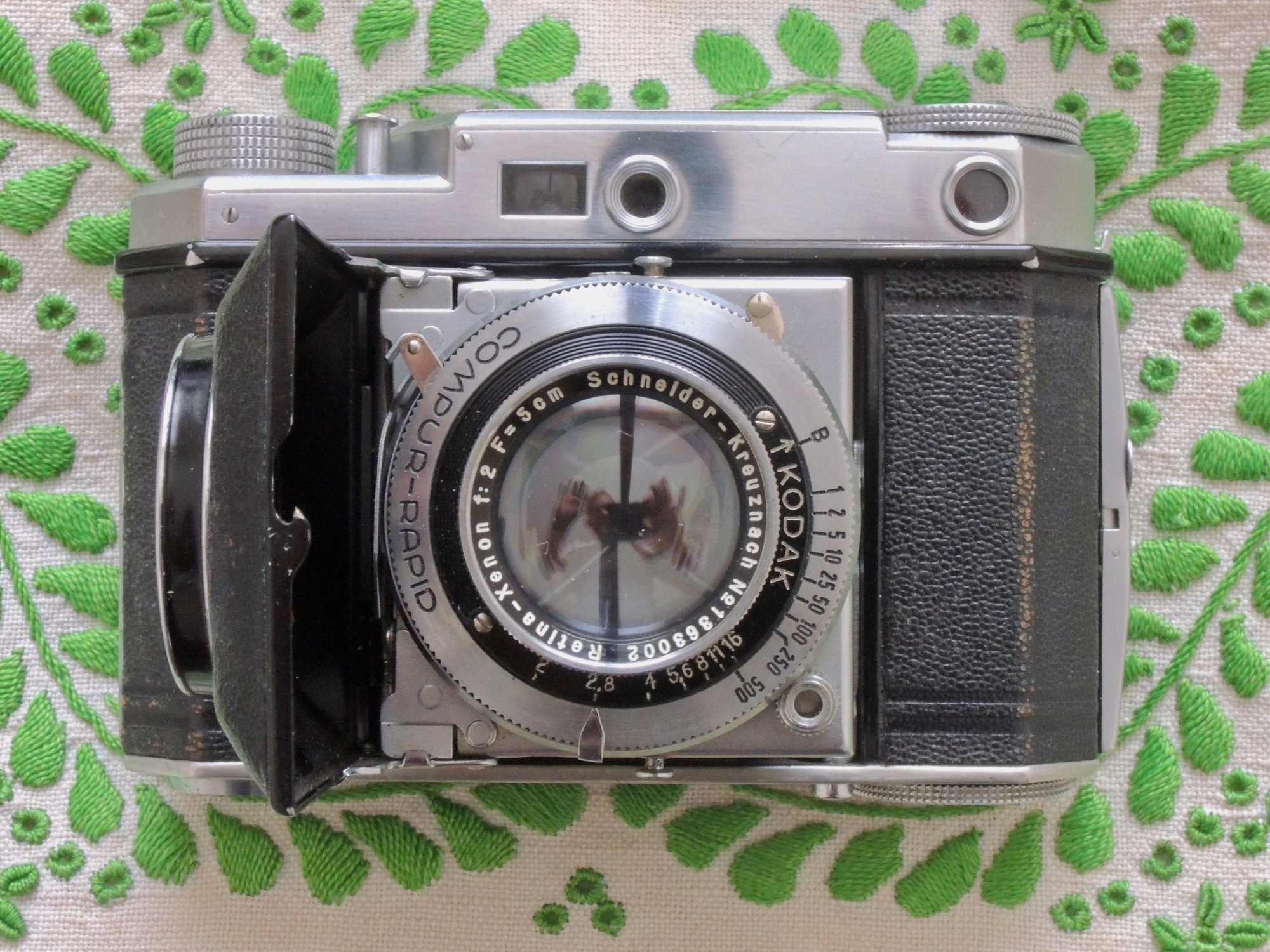 Coincidence is the “secret curator” of my collection, maybe because I “stumbled” accidentally into collecting cameras. If I had not chosen the apartment in József Attila utca in Budapest, I would have never walked into the Soós Fotó store (then) next to it, where I bought the first seven cameras of my collection. If I would not have needed new glasses in 2019, I would not have found the Petri Computor II in the store close to the optician. And if my wife would not have had a job interview* on the day of a public transport strike in Berlin (the third I remember in nine years living here), I would have never walked the side streets of Neukölln and entered one of the thrift stores where I found this camera. The Retina II was hidden in a small cabinet when I discovered it (the store had three cameras in total). When I wanted to know the price, the shop owner demanded 10 €, and even after I asked politely “Sind Sie wirklich sicher?” (translated: are you really sure?) kept her offer. Without any further hesitation, I bought it. What could go wrong? I still had time, so I went to the next drugstore, loaded the camera with cheap Kodak 200 Color and with the sunny 16 rule in my mind started to shoot my first roll.

Introduction to my Kodak Retina (Type 142)

Although the model number is “higher” then on my other Kodak Retina II (014), the type 142 Kodak Retina II is the older one and the last of the prewar models (for further details on the Kodak Retina II history, please read my earlier post). Like my other Retina II, it is equipped with a Schneider-Kreuznach ƒ 2.0 50 mm lens. But unlike the later model, this camera has one viewfinder window to compose the picture and another rangefinder window to set the distance. This secondary viewfinder sits directly under the rewind wheel, so the rewind spool has a hole in the middle of the axis. A miniature ratcheting freewheel mechanism keeps the axis uncoupled while advancing the film and only rotates it when you rewind the film. This mechanism is quite worn on my camera, so I cannot fully rewind the film but managed to get 36 shots anyway. The camera lacks an accessory shoe, but comes with a depth of filed calculator on the bottom of the camera (due to the depth of field markings in the lens this became obsolete on the later models), a tripod mount and a connector for a cable release. With the camera I got the ever ready case, sadly with broken straps. But for 10 €, I can easily life with this.

Photographing with the Kodak Retina II (142)

Open the back of the camera with the small lever on the left side. When you are pulling the rewind knob, you will see the “see trough window” of the axis. Now insert the film in the camera, wind it to the take on spool, and close the camera. Now open the camera with the small button beneath the camera, and open the front door. Cock the shutter on the lens, advance the film, release, advance, set the film counter manually to “1”. That’s it. Aperture on my Retina II ranges from ƒ 2.0 to 16 and the speed from “B” to 1/500. As there is no light meter installed, you need a handheld light meter, an app or you just use the sunny 16 rule as I did. To focus, use the (tiny and dim) rangefinder window and to compose the also tiny, but brighter viewfinder window. This process takes a while, but if you are a bit familiar with zone focusing this does not matter too much. The camera has a double exposure lock, so you have to advance the film before the next shot. To close the camera, do not forget to set the focus to infinity, as the camera prevents closing with the lens extended.
When the film is full, set the small lever on top right side of the back to “R” and the other lever on the left side of the camera to the point of the arrow. Now rewind the film with the rewind wheel, then open the back, pull the wheel and remove the film.

The Kodak Retina II 142 is, like her younger sister, a beautiful and compact camera with an extraordinary lens. Focusing takes slightly longer than with my other rangefinders, and the lack of a light meter forces you to think even more before you take a photo. But sometimes, this longer and maybe meditative process is exactly what I am looking for in a camera.

The camera can use any  35 mm film, shots above were done with Kodak 200 color.

*if you are curious: yes, she got the job