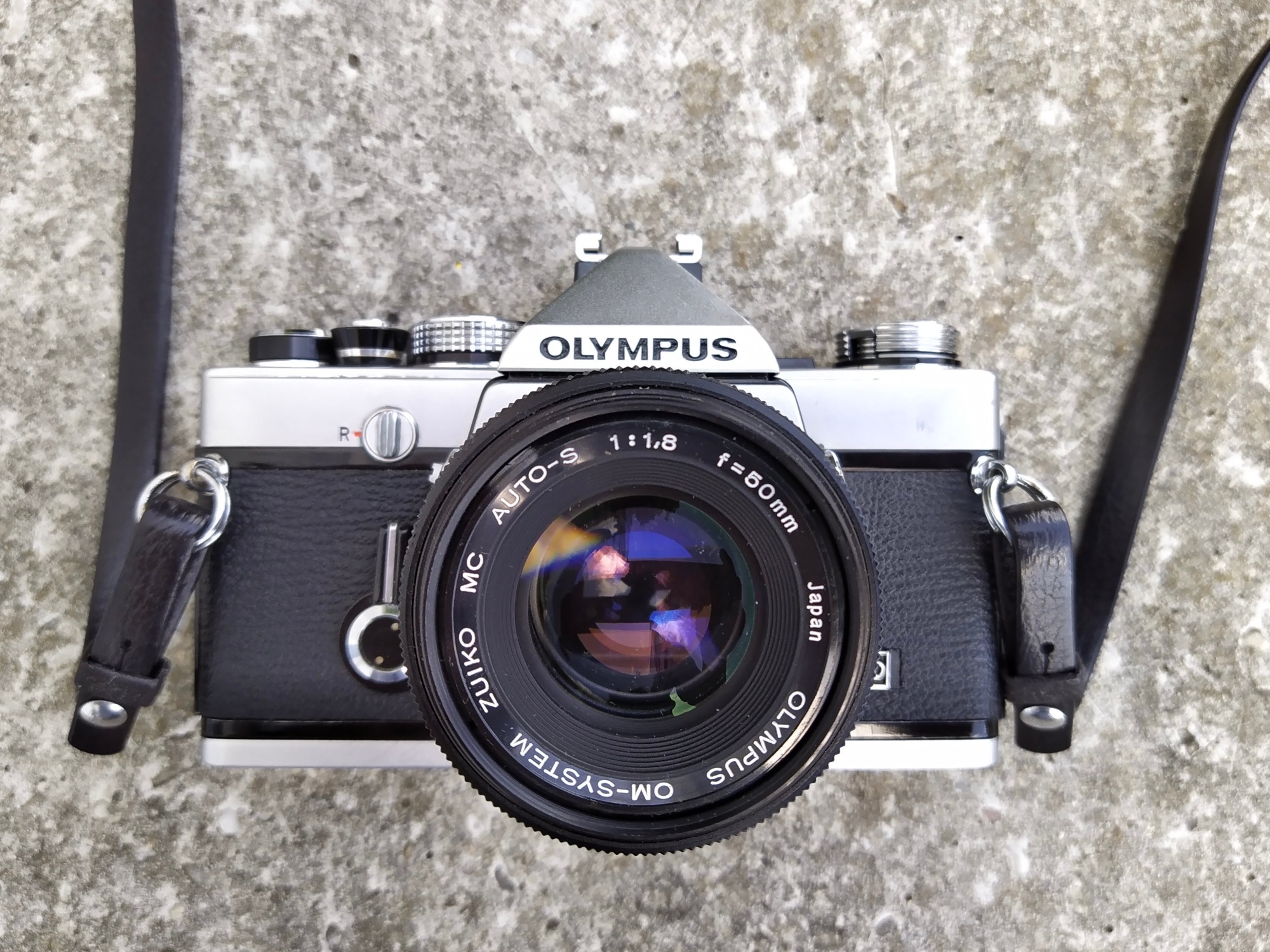 My favourite way of buying cameras is finding them on flea markets. I found there both Olympus Trip 35, the Olympus XA 2 and the XA (and all of them for less than 35 € each). Although the “Olympus section” of my collection was founded on the Pen cameras, those four flea market foundlings and finally my wife’s 35 RC made me an Olympus fan. I love the rather reduced due to design, the excellent lenses and the easy handling. Maybe this Olympus should be the one which could be “completed”, with only the SP, the PEN F and the OM-1 missing from my wish list…
Back to the flea markets: most of them were closed due to the Corona crisis. And even if they were open, I wouldn’t know where they were, as we just moved from Berlin to the southwest of Germany. But in this Summer, flea markets opened again, and one of the first I heard of, was a courtyard sale in my beautiful Hometown, Villingen. And luckily my nice agreed to hunt down any camera she might find.
Literally from the first place she went, she sent these messages:

One week later she delivered the camera to our place and it was in great condition (except the light seals, but I don’t think that’s always a big deal) and even the light meter seemed to work.

About the Olympus OM-1n

As the Olympus OM system revolutionized or even founded the market of (semi) professional SLR, nearly everything is already written about this masterpiece from legendary Yoshihisa Maitani. The full story of this camera, as told by his designer can and should be read here, the short story is that after the highly successful PEN series, Olympus wanted to build a smaller and lighter camera than the Nikon F series, fit for both and professional use. And unsurprisingly, they did it. Launched as the M-1 (Maitani 1) in July 1972, it was renamed OM-1 after (alleged) claims from Leica to change it to avoid it would be confused by consumers with their M rangefinders. It was immediately a huge success. In 1975 an (easier to use) automatic version, the OM-2 was released. The next iteration of the full-mechanical OM-1 was the OM-1MD in 1974, with the “MD” as acronym for an optional motor drive, a feature also include in the final version, the OM-1n released in 1979 with some additional changes on the winder lever as well as the flash functionality.

The OM-1 is a fully mechanical full frame SLR System camera (so you can change not only the lens but various other items, and it has a wide range of accessories) with a proprietary lens mount and through the lens metering. As it works fully mechanical, the batteries are only needed for said metering.

But as written before, all this can be read out there written by better writers than myself. But what are my personal observations?

When I hold it in my hands for the first time, I found it, although the smallest SLR of it’s time, bigger than I expected compared to “my” other Japanese SLR, the Nikon FA. But then I realized that the size of the FA (or more precisely the FM) was Nikon’s (among others) reaction to Maitani’s design. The next thing i noticed, was the unusual place of the speed settings. Not on the top plate like usual, but instead on th elens barrel. A position I am totally used to, as I was used to this “strange” location from my first SLR, my Kodak Retina Reflex S. The third thing I slowly discovered was the incredible precision of all metal parts, which surprise me still any time I hold in my hands. Lastly, the giant viewfinder (a huge plus for me as I am wearing glasses) was an instant joy to use.

Taking pictures with the Olympus OM-1n

Insert a SR44 battery with a voltage reducing diode or a hearing aid battery with some cardboard around if you want to use the meter. (See my review of the Olympus 35 RC which needs the same workaround). Open the back of the camera by lifting up the rewind spool. Insert your film “as usual”, close the back, and you’re ready. Set the film speed by pressing the small button next to the ISO dial on the top right (the place usually reserved for the speed dial) and then turn the dial to the right value. To turn on the light meter, set the lever on the left to “ON” and don’t forget to switch it to “OFF” after usage. Select your shutter speed and aperture on the lens barrel, check the settings with the light meter’s needle type index in the viewfinder, adjust your focus (and in case check the depth of field by pressing the button on the lower right of the lens barrel) and shoot. For long exposure, use a flash (the hot shoe can be removed if not needed), the built-in self-timer and to avoid shaking, lock the mirror with the lever on the top right of the lens barrel. To get the most out of this professional instrument, I suggest consulting the camera’s manual. Film advance is done as usual by using the advance lever, releasing the film for rewinding is done not so usual by turning the small lever on the front right of the body. Small difference, but you get really fast used to it. Regarding lenses there is a huge variety, but some lenses can be quite pricey. I’m happy with my Olympus OM Zuiko 50mm f 1.8 lens (finally fast enough for low light), the RMC Tokina 80-200mm f 1:4.5 Zoom lens the camera came with and an Exakta 28mm f 1:2.8 lens I bought for my last holidays.

Although I love my various compacts and rangefinder cameras, I take my best family photos with SLRs. And if the occasion demands for something with great quality but no sentimental values (yet), this is the camera I’ll take.

Try to learn the sunny f 16 rule, so you do not need batteries at all. If you would like to use the meter (like I do), get 675 hearing aid batteries. They cost nearly nothing, are easy made to fit in the battery compartment are non-toxic and they work. There are also comparably cheap adapters called MR-9. Also, they are non-toxic.

The camera can use any 35 mm film, the light meter measures between 25 and 1600 ISO, but as it’s fully manual you can use any film you like.

https://www.butkus.org/chinon/olympus/olympus_om-1/olympus_om-1.htm (Manual)
https://blog.jimgrey.net/2011/09/19/olympus-om-1/ (Jim Grey has a review of the original OM-1)
https://blog.jimgrey.net/2015/08/28/another-olympus-om-1/ (And in Jim’s second review, you’ll see that the OM-1 was also available in black)
https://casualphotophile.com/2016/04/25/olympus-om-1-camera-review/ (A detailed review on CasualPhotophile)
https://www.photothinking.com/2021-10-20-olympus-om-1n-smaller-is-bigger/ (A quite recent review on Photo Thinking, including reviews of some lenses)