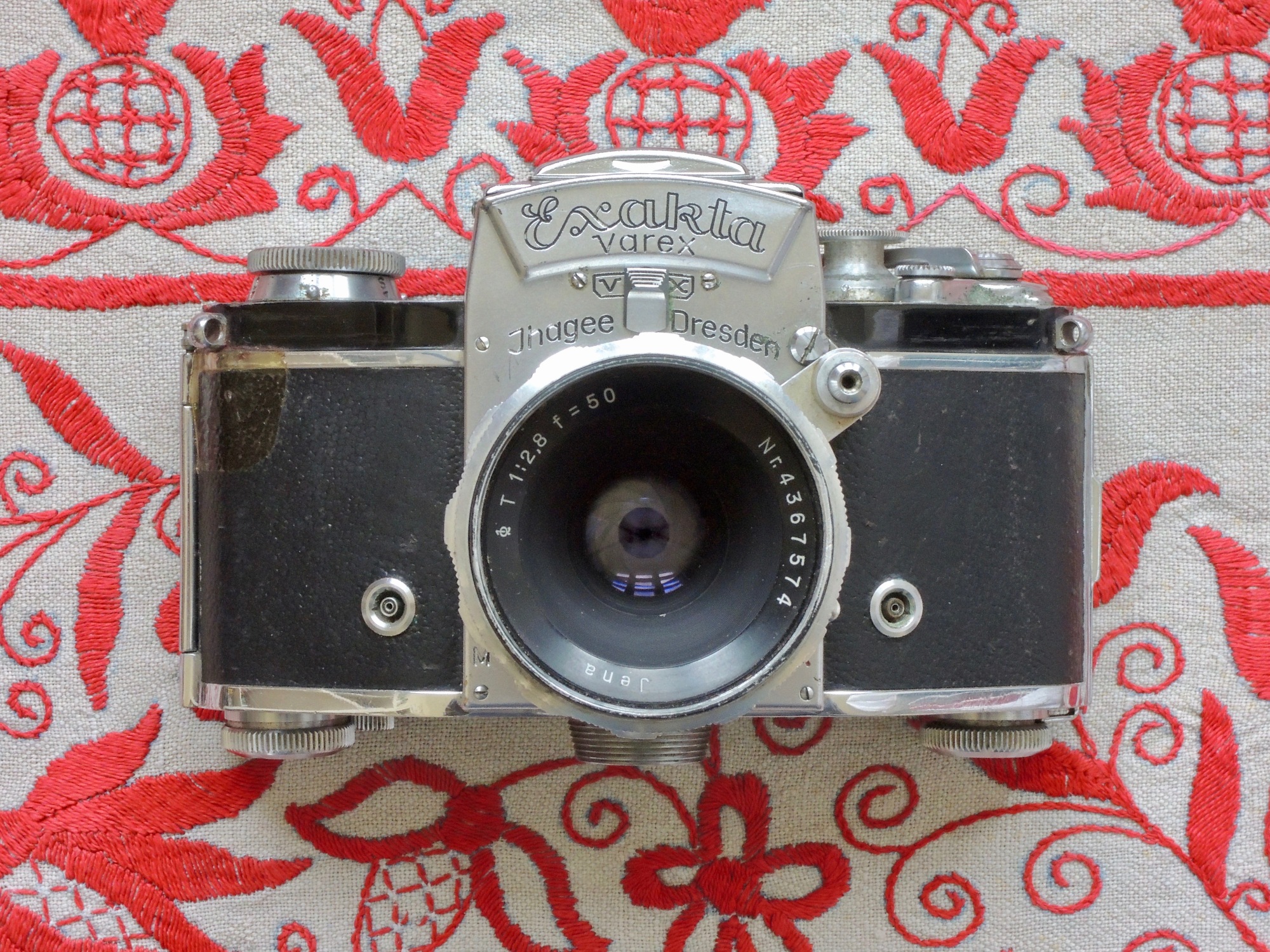 All things come to an end, and here’s the end of the mini-series “how I once received five cameras at once and it took me over a year and a half to blog about them”. The Exakta Varex VX is a quite complex system camera, so this one came with a wide range of lenses, an auxiliary waist-level viewfinder and some exotic lens extension rings, a shutter bridge and tons of filters. The camera belonged to my uncle. I’m glad it came late to the collection, so I was already familiar with features like the speed selector dial from my short lived FED 4 (broke after the first film because I ruined the shutter curtain) and the waist level viewfinder from my Recesky DIY TLR. However, I didn’t know that automatic long-time shutter timers exist or cameras could have a film cutter build in. In the beginning, the shutter (and some of the lenses) were stiff, but with the second film all speeds seem to work. Currently, I am still dealing with a film transport issue, but I hope I will be able to fix this as well.

About the Exakta Varex VX

The Exakta Varex VX (or just Exakta VX in the US due to copyright issues of the ‘Varex’ brand) was produced by Ihagee in Dresden from 1950 – 1970 in various variations. The camera is based on the previous model, the Kine Exakta, the first commercially produced 35mm singe lens reflex camera. Based on this list and my camera’s serial number, it should be from 1955 and 1956 as the third of four VX variants and the first model with “modern” PC sync flash connectors. As a real system camera with interchangeable lenses, viewfinders, extension rings, bellow mounts etc.  you could start a separate collection only around this one camera itself.
My camera came with five lenses in various conditions:

The 35, 50 mm & 85 mm are clean and work fine, on the 153 mm the automatic aperture is stiff and on the 240 mm on of the aperture blades gets loose when fully opened. But still the widest set of lenses in my collection.

Beside a normal pentaprism see-through viewfinder, my Exakta has also the waist level viewfinder which allows an interesting way to take pictures, although without training it takes me ages to proper compose a picture with it.
The camera is fully manual, has an accessory shoe, a tripod mount, two pc sync connectors for flashes a removable film spool and a build in film cutter. The purpose of the latter is not quite clear to me, I assume if you needed the just made photo immediately or you wanted to change from colour to black and white, you could cut the film, open the camera in a dark room, remove the take on spool in a dark room, develop the film and continue with another roll. Again, I do not really get the concept.
The camera works fully manual, so you’ll need an external light meter. To add some Trivia: Just like my Minox B this camera is also a movie star: it was used as James Steward’s camera in Alfred Hitchcock’s Rear Window

Pull out the rewind knob on the left side of the camera’s bottom and open the back. Pull out the knob on the right side and insert the film on the right side. Push knob in, but not the inner part of it, which is only needed to rewind the film. Insert the film on the removable take on spool, wind (with the lever on left) and close the back. Set the film counter to “1”. For “fast” times, set the speed between 1/25 to 1/1000 s with the other dial on the left side. Set your aperture on the lens, focus, move the small shutter safety cover “up”, focus, shoot, the shutter release is on the front left next to the lens.
For long exposures, set the speed dial to “T”, wind the timer (?) wheel clockwise, lift it up, set the time from 1/5 to 12 seconds, then release. If not in “T” mode, you can use the wheel as a self timer. Very ingenious, and very confusing. To rewind, press the little button on the left side between the frame counter and the speed dial, push the inner part of the rewind knob on the bottom in, and rewind. The change the viewfinder, press the lever on the top plate’s front down, remove the viewfinder and exchange it. To use the film cutter, open the little screw next to the rewind knob, and slowly pull the cutter out. Then please explain me in a little comment to this post why you did this.

The Ihagee Exakta Varex VX is all in all a fascinating historical camera with some interesting details. Mine will need a careful cleaning, new foam for the mirror and maybe a professional repair to fix the transport problem. For taking pictures, I prefer my Kodak Retina Reflex S and the Zenit TTL

Just one: read the manual. You’ll need it.

The camera can use any  35mm film, shots above we done with Fuji Superia 400, Ilford HP 5 and Kodakcolor 200

5 thoughts on “The Exakta Varex VX”