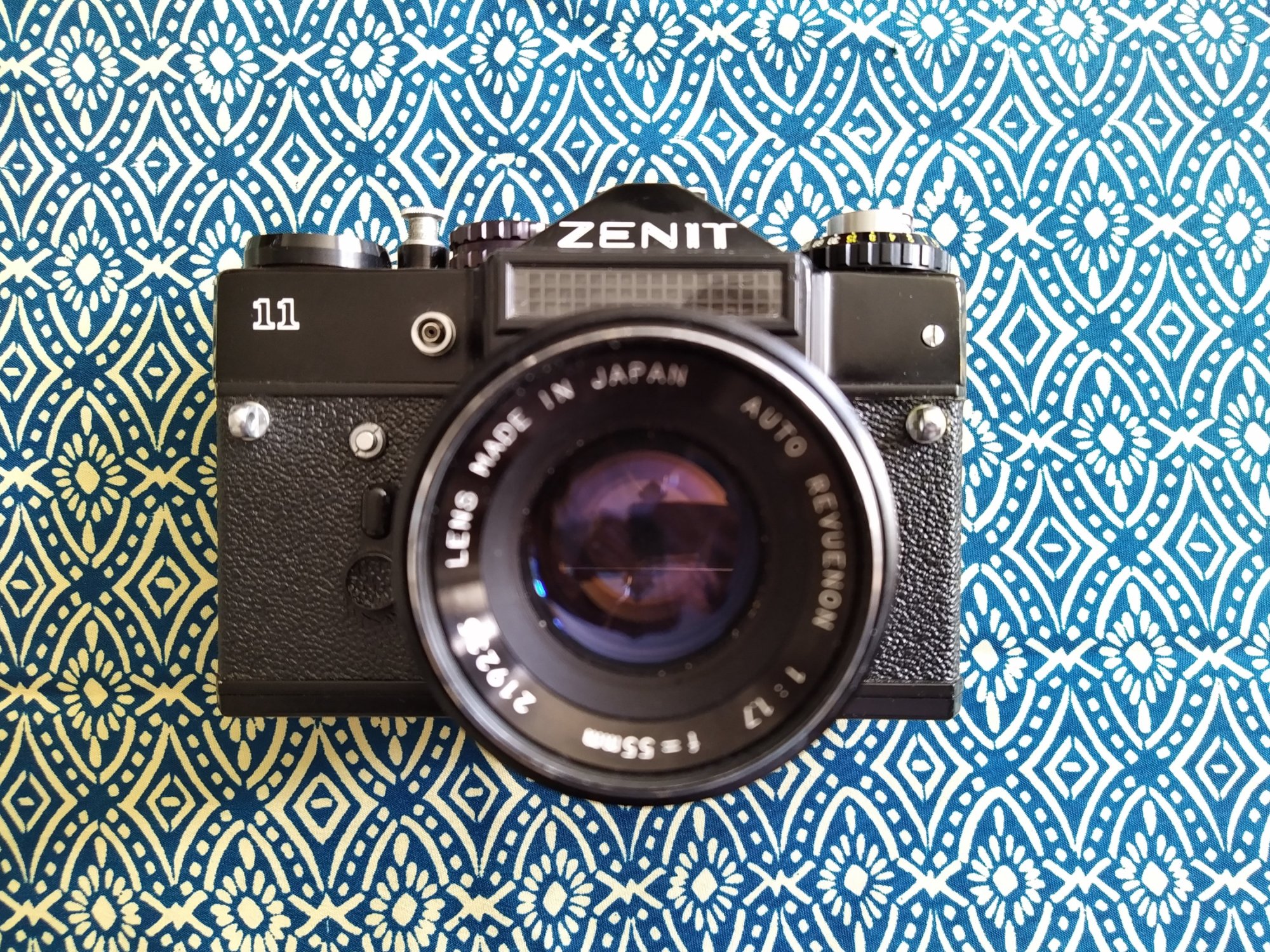 I still did not dare to repair my Zenit TTL’s light meter, as I am afraid to break the whole camera. So I had an idea: what if I would buy another cheap / broken Zenit E type camera to practise the repair on it? The search was succesful, and as soon as I found a Zenit 11 for only 10 €, I could have finally started my “how to repair a Zenit” training. But “sadly” it was in such a great condition, that I decided not to open it, but rather wait till I will find another, more damaged, training object.

The Zenit 11 is an evolution of the Zenit E, precisely the successor of the Zenit ET. It was produced from 1981 until 1990, so although it is still equipped with a selenium light meter instead of the CDs TTL meter, it’s younger than the Zenit TTL. The body was slightly improved: the tripod socket sits under the lens mount and the opening mechanism was changed, so no more accidental opening. 1.5 millions were build by KMZ and Belomo, so chances are high you my find one too. (While writing this, I think about getting a Zenit 12: tech fusion of both models). The camera is as simple as it gets: 5 speeds including “B”, a self timer, and an uncoupled selenium light meter all packed in a “light” full metal body. (insert your “built like a Russian tank cliché here).
Regarding lenses, you have an incredibly wide choice, any M 42 lenses will fit. As I already own one Helios 2/44 58 mm lens (and some other M 42 lenses too) I did not really care my Zenit 11 came only with an odd Domiplan 2.8 / 50 mm lens. At least it stops down to f 22, which might come handy in the summer.

Taking pictures with the Zenit 11

Open the back by pulling the rewind crank and insert your film. Then close and set the ISO to your film’s speed. The scale is labelled GOST/ISO, and as I shoot only negative film, I’m fine with this simplification. However, if you use slide film, you might consult an GOST / ISO conversion calculator. Then manually set the film counter on the right side to “0” as it will count up. Now advance your film with the lever on the right, point your camera to the object and bring the circle index of the light meter’s needle. Next you read the matching speed/aperture combination. (Or you just use the sunny f 16 rule and trust your eyes and your brain). Select the proper speed on the dial on the right side, the f-stop on your lens, focus and shoot. Repeat until the film is full. Then comes the one odd thing: there is no rewind button, you have to turn the outer ring of the release button to the left instead, then you rewind the film as usual.
There might be no simpler and cheaper way to try film photography with an SLR out there, so if you see any of the Zenit E series (best with the kit Helios lens) just buy it. And if it’s a Zenit TTL or 12 and does not work, send it too me. I still need the training object.

Tips & Tricks shooting with the Zenit 11

Well, the only trick is to test the camera before you waste a test film, as it might be more expensive than the camera. As you can see, my 10 € were well spent.

The camera can use any 35 mm film from 20 to 400 ISO if you want to use the meter without extra calculations. But technically you can use any film you wish as the camera works fully manual

To reflect the Zenit 11’s “minimal” approach, I changed my this blogging setup: the photos of the camera were shot with my Nokia 7.2 and the post was written on a 160 € refurbished acer chromebook 14 CB3-431 instead of my usual Nikon P310 and my MacBook Pro setup.